Advocates for Citizens’ Rights is a 501(c)(3) non-profit committed to protecting the civil liberties and constitutional rights of all Americans — as well as the human rights of all individuals, world-wide.

Currently, hard-working Americans in major companies and industries are being unlawfully discriminated against:  forced to either take an experimental protocol that has killed thousands, or face losing their careers and pensions.  These employees are NOT alone — many major U.S. companies are 30-75% NOT vaccinated.  To a man, and a woman, these workers are rightfully upset at this unconstitutional mandate, and ready to make their voices heard.  Especially now that, as of October 27, a court in Texas ruled against Southwest Airlines.

Accordingly, Advocates for Citizens’ Rights is in full support of the workers who are organizing a Nationwide Walkout.  This is a Four-Day NO SHOW.  It will commence Monday, November 8 and continue through nightfall on Veteran’s Day (Thursday, November 11).  Employees were self-organizing already to do this.   We are simply — along with advocates like you nationwide — acting as their voice.

Know that this is a watershed moment in time, not just because Freedom hangs in the balance, but because ALL groups are coming together to support this Strike for Freedom:  from Bobby Kennedy’s group Children’s Health Defense to Simone Gold’s America’s Frontline Doctors, to every major lawyer and doctor and media influencer, including General Flynn.  Please do your part:  make this knowledge go viral.  Post the electronic flyer EVERYWHERE on social media.  Blast it to all your databases and viewers and colleagues.  Help me get the word out:  #AxeTheVax

Rallies are also being organized in cities nationwide during the week of November 8 — stay tuned.

In close, know these truths:  Freedom isn’t something you buy — it’s something you earn. WE are the leaders and heroes that we have been waiting for.  And it’s time for Americans to Stand For Freedom — I’ll be right there with you.

**  Nothing herein constitutes the formation of an attorney-client relationship; and the strike does not apply to employees who are by law or contract prohibited from striking.

Justice: We combat injustice in the healthcare context—because injustice anywhere is a threat to justice everywhere.

Action: And we speak – always we speak – because we understand history:

First they came for the Socialists, and I did not speak out—
Because I was not a Socialist.

Then they came for the Jews, and I did not speak out—
Because I was not a Jew.

Then they came for me—and there was no one left to speak for me. . .

PROFESSIONS MUST REMAIN
IN THE HANDS OF PROFESSIONALS 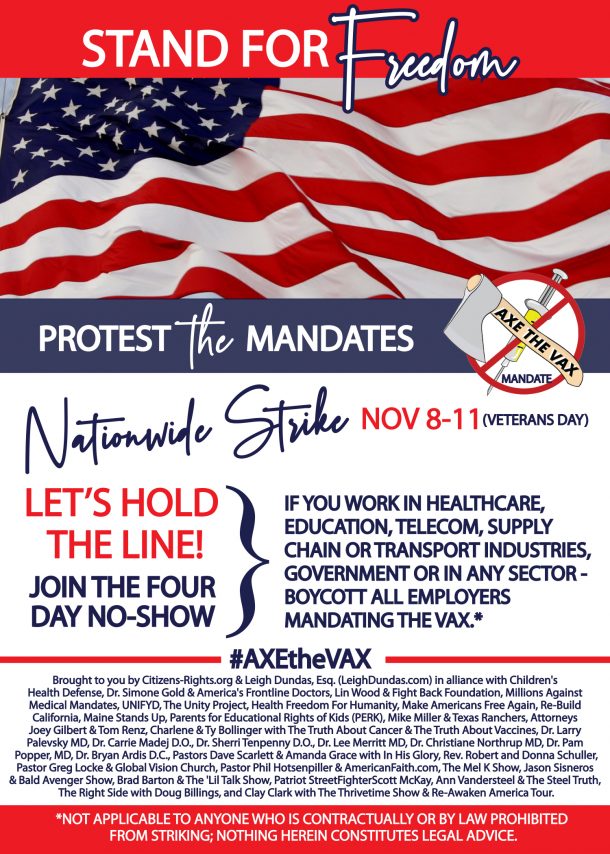